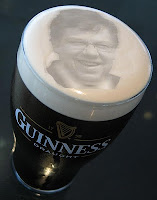 By all accounts it’s all over for Brian Cowen. The party that has been led by the most unpopular leader in the country’s history is now going to remain in power until after the General Election while Fianna Fail will have a new leader that will spend the next 2 months distancing himself and the party from what they’ve done for 14 years.
So let’s tease out the possibilities. Micheal Martin may well be the new party leader who will not be Taoiseach. He will take decisions on the basis of what is good for Fianna Fail. He won’t be Taoiseach and he won’t have the responsibility of the job of Taoiseach, which is different to that of cabinet minister. Presumably with a caretaker Taoiseach subservient to the party leader as a party member, whatever Micheal looks for from Brian will be no problem! My fear is that Ireland is now on the verge of cronyism version 2.0. We’ll be unique in the world in having 2 discredited leaders, one in office but having no power, the other in power without an office. Fianna Fail will now do an Enda with Brian Cowen for the next 2 months hiding him from scrutiny hoping that their profile will plateau out. There exists a possibility that the General Election campaign will be effectively a 2 way debate between Labour and fine Gael with the economist candidates shouting from the sidelines.
The promised General Election is still at least 2 months off while the Greens seem happy to stay on for the sake of the planet and the Climate Change bill. It may be that there is a growing reluctance for a ballot and if a way out can be found to defer it then Brian Cowen will be happy for the sake of the party to comply, the Greens facing extinction will look the other way. The arrival on the political scene of the economist party is interesting as it will provide Fine Gael with additional options other than Labour should they be within striking distance of a majority. These candidates are not going to run so as to have a 5 minutes speaking time every 6 months from the backbenches. To be fair to Shane Ross who is very good at what he does in the Oireachtas, he wants to be in office and make decisions without the distraction of potholes and the minor inconvenience of the electorate with the blocked drains. That’s why he won’t run in his home constituency.
I hope that the Labour no confidence motion goes ahead and is successful. The prospect of a lame duck Taoiseach with a lame duck government with ministers who are at war getting a vote of confidence at carrying on regardless is toxic to our nation. It’s time to wave good bye to the past and let the people have their say.
Posted by Unknown at 12:09 PM

Quite true, Joe, and while we have had two leaders before (CJ resigned as FFailure leader after losing the '88 election [I think] but stayed as Toiseach until a new leader was elected) we haven't had the sight of two of them working side by side.

Personally, I want Biffo to lead Ffailure intot he election - it will result in more carnage than if a new man/woman was able to start reeling back some of their disaffected voters.

Leave Biffo alone, he's good for the country (by destroying his party)!