Never ask a question unless you know the answer first! 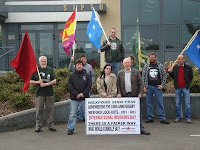 I would have loved to have gone to Arbour Hill today to mark the 95th anniversary of the execution of James Connolly but for family reasons I was otherwise detained. I wonder what Connolly would have made of Ireland (well this part of it!) almost a century after his death. Connolly believed strongly in strength and unity. I’m sure he’d weep if he knew that the successor to his ITGWU was being picketed in Wexford by the self-proclaimed successors to Pearse. Many of James Connolly’s family were there at Arbour Hill to see his direct successor as leader of the Irish Left Eamon Gilmore speak today. A century on a lot has changed but a lot remains the same.

Connolly was an able man who showed that it was always necessary to cut a deal so as to protect your interests. No better example than the Wexford lock Out, the centenary of which falls later this year. The object was that the workers would be represented by their own Irish Union in their case the ITGWU. Connolly visited here during the strike, I have a copy of a letter from him in Corporation St Belfast to Richard Corish in Wexford around that time. I showed Nessa Childers MEP the step from where he spoke almost a century ago. Connolly accepted compromise to end the lock out just as he did in Dublin in 1916 to prevent further suffering. He knew that eventually his objectives would be secured. The SF picketers posed the rhetoric question “What would Connolly say?”, Well here’s your likely answer

Wouldn’t it be great if some of those who organised the picket at SIPTU in Wexford actually joined a union and perhaps read up on Connolly’s life? In the re-conquest of Ireland Connolly said “If the old political parties must go so to should the divisions in Labour, we should work to for the obliteration of all divisions in the forces of Labour in the industrial field.” What may surprise some of those who proclaim Connolly as their inspiration is his belief in co-operation for the purpose of common regeneration! He talks about replacing suspicion and mistrust and difference in attitude between those who claim pity and those who are strong and self -reliant to enforce respect. Connolly was also critical of the gombeen men and their kind with their loud mouthed assertions of patriotism. The Re-conquest of Ireland was published over 100 years ago but is as relevant for the days we live in now as it was back then.

The logical follow on seems to me that perhaps its time to stop wallowing in misery and start uniting behind a policy? The backdrop to the lumpen detachment of Mayday are reports of children arriving hungry in school while parents cook by candle light in homes that are the subject of repossession cases at courts. Earlier this month the Master of the High Court criticised banks for pressurising some of their customers over repayments which in some cases were contributory factors in suicide. 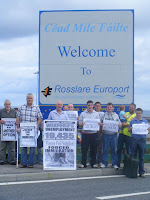 Strikes me that James would have very little time for those in Wexford who used Mayday as a self seeking publicity stunt. Perhaps they would have been better off coming up with an alternative that would contribute to getting our country out of the mess it was left by the wealthy insiders, the sort of person who a century ago kept the country in penury. A century on a lot has changed but a lot stays the same.
Posted by Unknown at 10:05 PM

Good post, enjoyed the read, however I would have issues with some of your arguments. Now is not the time. But regarding the central point of your missive, I agree totally.

Connoly would have had a few cheerleaders out for austerity? would he? I know the answer, you sir, do not.

Connoly would have had us out applauding austerity? Really? really? with pom poms? and a round house kick to the arse of anyone mentioning the shit we're in?
I know the answer, you sir, do not

@Annie I've made no such claims at all, you're entitled to mis-read my post, I defend your right to do that but it gets no one nowhere. Perhaps you should read up on what Connolly actually said in the context of the times he lived.

The Irish left would have you think that Connolly was the only socialist that ever walked, that's completely untrue and uninformed. The reason why the Irish right has been more successful than the left is that they don't make themselves prisoners of a romanticised past.